Rennes School of Business was founded in 1990 and was originally called “Sup de Co”. The youngest of France’s Grandes Écoles de Commerce has continued to develop over the past 30 years to join the Top 10 best French management schools*, particularly standing out for the criteria of “International Identity” and “Academic Excellence”.

Discover its remarkable journey and its evolution through the key dates and moments that have marked its history. 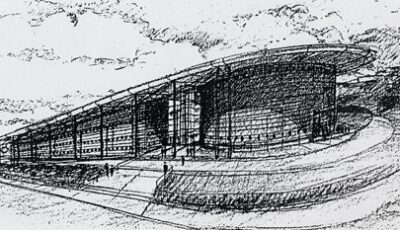 A Business School in Rennes

In 1989, the General Assembly of the CCI took the official decision... 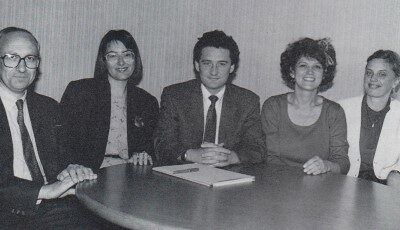 The creation of a Business School 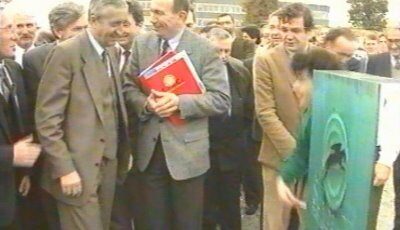 Laying the foundations of an outstanding school

Recognise this glass wall, inaugurated alongside the very first stones of the... 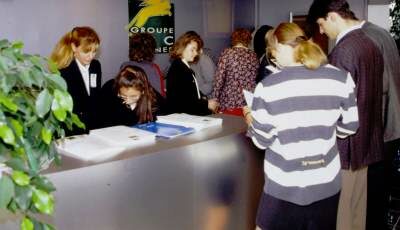 Jacques Calvet, the CEO of the PSA Peugeot Group, was the school’s... 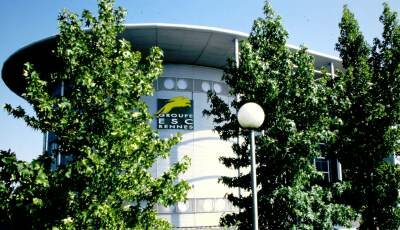 A futuristic building in the shape of a spaceship! Designed by the... 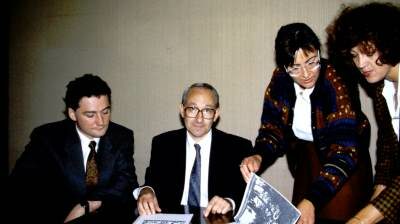 The French Ministry of Education gives its approval!

Now officially recognised by the French Ministry of Education, the Sup de... 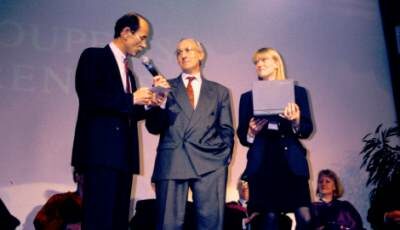 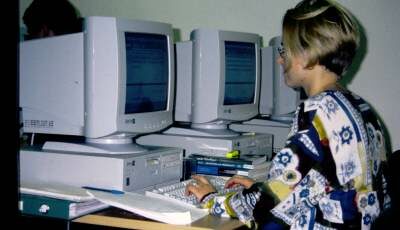 Accreditation from the British Open University

In 1994, ESC Rennes received an accreditation from the British Open University....

A Business School in Rennes

In 1989, the General Assembly of the CCI took the official decision to create an Ecole Superieure de Commerce business school in Rennes.

The first Board of Directors of the Breton Business School takes place! This was the start of a great adventure for “Sup de Co Rennes”!   The Ministry of Industry validated the creation of the school shortly  afterwards. Sup de Co Rennes was added to the network of the Écoles Supérieures de Commerce et d’Administration des Entreprises “ESCAE” and joined the entrance examination process with the same name.

Did they ever imagine that 30 years later, 5,000 students from all over the world would be happily arriving on campus each year to study management in an Unframed environment? 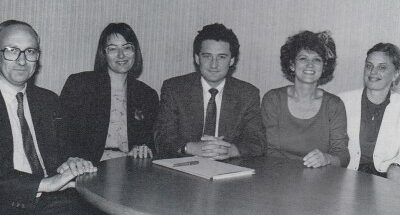 The creation of a Business School

The management team is made up of 5 people, including Bertrand Ducheneaut, PhD in Economics, the very first Director General! For Philippe Roucoule, a “Puma” student as they were referred to at the time, “Sup de Co Bretagne Rennes is an excellent experience for me because everything has to be created from scratch. I am sure that it is a school that will grow very quickly, and that we will all grow with it! I find its educational programmes to be very original: it is the only Sup de Co which allows all of its students to spend a semester or a year abroad and be awarded with a double degree at the end.” He wasn’t wrong! The school had hardly opened its doors, but it was already avant-garde! 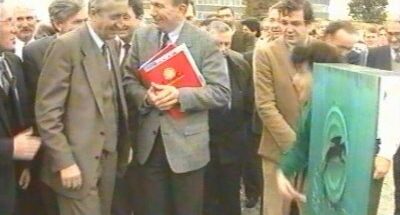 Laying the foundations of an outstanding school

Recognise this glass wall, inaugurated alongside the very first stones of the school? 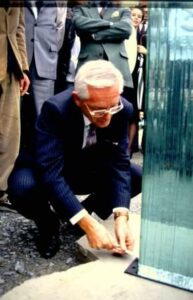 It still stands today, 30 years later, in the rue intérieure of Rennes School of Business. Countless students have walked past it, perhaps unaware that they were brushing past one of the very first building blocks of the School! 1990 celebrated the official creation of the Business and Management School, known as ‘Sup de Co’ to its friends, and the students put their hands together to cement the stones at the inauguration. They were the very first Alumni-to-be, a network which now proudly represents over 22,500 graduates! A risk which paid off, for these young pioneers who were betting their future on a School yet to make its name. As we all know, daring is still one of the school’s five core values! 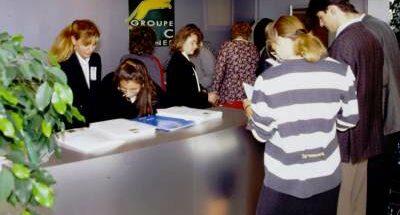 Jacques Calvet, the CEO of the PSA Peugeot Group, was the school’s first sponsor

Present when the first stones of the foundation were laid, Jacques Calvet, the CEO of the PSA Peugeot Group, was the school’s very first sponsor, the precursor to a long line of personalities with brilliant, international and unusual careers, reflecting the school’s ambitions for its students! Cohort 1 (1990 – 1993) was housed at 4 rue des Français-Libres (which translates as ‘road of the Free French people’!) the street was aptly named, and freedom is now one of the School’s values!) At the time, there were nearly 90 students. Today they remain the original leaders of the many student generations to come, and the school is proud to recognise their true value! 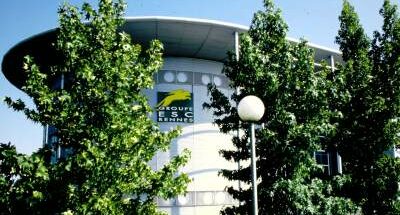 A futuristic building in the shape of a spaceship!

Designed by the architect Jean-Jacques Morisseau, the futuristic building, in the shape of a spaceship, was inaugurated in October 1991, in the presence of many elected officials and companies! Artists participated in the inauguration of the school and the puma was already part of the school’s identity. Today, you can get your own stuffed toy puma at the School, and it still represents the Rennes School of Business community to this day. Flexible and dynamic, he is no longer yellow, but blue, and is always leaping outside the frame of his logo to see even further! 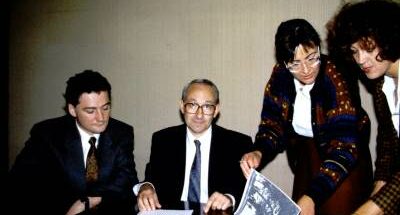 The French Ministry of Education gives its approval!

Now officially recognised by the French Ministry of Education, the Sup de Co diploma can compete with some of the biggest and oldest business schools! The management team can work in peace. The school is already looking towards the rest of Europe, talking about the internationalisation of business, the importance for students to prepare for their future and developing a multicultural environment with courses taught entirely in English, international teachers and student exchanges. “Companies can find the negotiators they are looking for among the future graduates of Rennes SB.” From an international identity to strong links with companies, the building blocks of the School are already there! 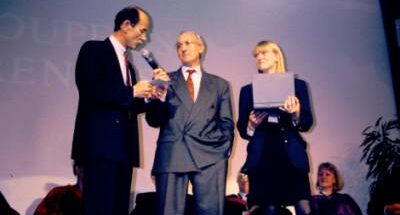 1993 marked the very first batch of graduates, headed by Isabelle Bui, the class valedictorian, who has since gone on to become a successful coach.

1993 was an exciting year at the School, particularly with the presence of François Pinault and Alain Minc, celebrities with brilliant minds who came to meet the students, and due to the signing of two new partnerships with Bull and Axa. Let’s not forget the visit from mountaineer Benoît Chamoux, who had climbed ten of the world’s fourteen peaks over 8,000 metres, and whose message to the students was to refuse to listen to their egos and “that it is unreasonable not to know how to give up”. 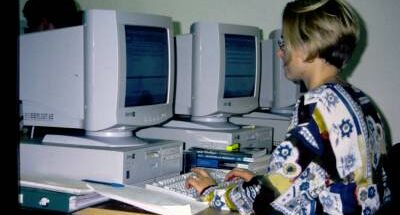 Accreditation from the British Open University

In 1994, ESC Rennes received an accreditation from the British Open University. From then on, the School was authorised to award Anglo-Saxon degrees: Master of Arts in International Business (MA), Master in Business Administration (MBA), MPhil and PhD! This was a decisive step forward for the School, who was therefore able to welcome students with increasingly diverse profiles and to broaden its range of training and teaching programmes.